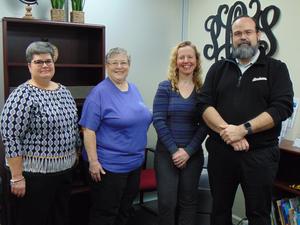 During the February meeting of the Pamlico County Board of Education, Jim Durham, Band Director, and Pamlico County Band Booster representatives presented a check to Jeremy Johnson, Pamlico County Middle School Principal, to help fund the renovations at the hurricane-damaged middle school.
Most of the money donated came from the “Band Together for Hurricane Relief” concert fundraiser event held in November. The Pamlico Sound (PCHS Jazz Band), Brant Island Strings (Pamlico County), The Beaufort Blues Project (Beaufort, NC), The Spread (Newport, NC) and The Dust Parade (Wilmington, NC) all performed at no charge. Jim Durham organized the event and the Band Boosters helped a great deal.
Concert attendees were asked to donate $5 per person to attend the event, but funds were also earned by selling sodas and waters (donated by the Band Boosters), and selling event T-shirts (printed and donated by 110% Screen Printing of Beaufort). Mari's Hella Fat Food Truck also donated a portion of their proceeds to the cause. In addition to the Band Boosters, band students helped staff the event and Mr. Hank Barbee from The Dust Parade helped by setting up and running the sound for all of the bands. Additionally, a percentage of the Band’s annual fruit sale profits was donated to the middle school.
Pamlico County Schools is most appreciative of all that the Band Boosters have invested in the Pamlico County Schools Bands and the community.
Pictured: (l-r): Patricia Rose, Lynn Durham, Mickie Durham (all Band Booster Representatives) and Jim Durham.