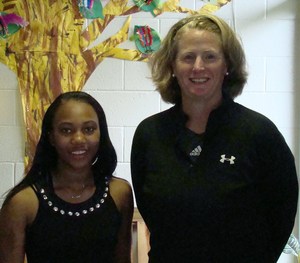 During the May meeting of the Pamlico County Board of Education, the Board recognized two Pamlico County High School student-athletes who were selected for the 2017-2018 Sun Journal All-Area Girls’ Basketball Team. The Board also recognized Coach April Rose as the 2018 Sun Journal Girl's Basketball Coach of the Year.
Junior Jainaya Jones was selected for the Sun Journal All-Area First Team. Jainaya was a huge contributor to her team’s second straight 1-A state title game season. Senior Hydia Davis was selected for the 2017-18 Sun Journal All-Area Second Team. Hydia played a major role on the team during the season. Hydia was the team’s best rebounder and was a scoring threat in the post.
Jainaya was also chosen as the Sun Journal Girls’ Basketball Player of the Year. Sometimes, one of the smallest players on the court, Jainaya was a mighty force there! She averaged 19 points, 3.8 rebounds, 5.3 assists and 5 steals per game during the season. She was definitely a part of the driving force which ultimately steered the Pamlico Hurricanes all the way to the state title game. We look forward to seeing more of her talents on the court next year.
Coach April Rose has been, once again, named as the Sun Journal’s Girls’ Basketball Coach of the Year! Coach Rose led the Lady Hurricanes to a 26-2 record this season. Her coaching expertise, combined with the talents of her girls, took the team to the state 1-A title game again this year. We anticipate, with great excitement, another excellent girls’ basketball season next year.
Photo Caption: Jainaya Jones and Coach Rose.