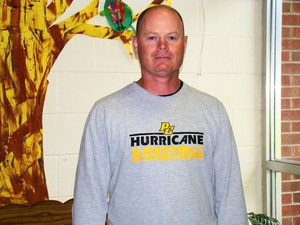 During the May meeting of the Pamlico County Board of Education, the Board recognized four Pamlico County High School student-athletes who were selected for the 2017-2018 Sun Journal All-Area Boys’ Basketball Team, the Player of the Year and Coach of the Year.
Junior George Jones, junior Lamont Murray and senior Caleb Barron were selected for the Sun Journal All-Area First Team and senior Sincere Gibbs was selected for the Sun Journal All-Area Second Team. George was the leading scorer for the Hurricanes. Lamont averaged 11.8 points, 5 rebounds, 2 assists and 2.1 steals per game. Caleb averaged 10.7 points, 4.2 rebounds, 3 assists and 2.1 steals per game. While often being the smallest player on the court, Sincere produced like the biggest player. His strengths are his ability to penetrate and pull up for the jump shot in the paint and his defensive ability.
George Jones was also chosen as the Sun Journal Boys’ Basketball Player of the Year. As the tallest ‘Canes starter, George averaged 15.2 points per game, 7.3 rebounds, 2.1 steals and 1.3 blocks per game. He was an instrumental part of the team’s successful season, which included the Coastal Plains Conference regular season title, the league’s tournament, and playoff games, setting them on course to play in the state championship game.
Coach Earl Sadler, Jr. was named the 2017-18 Sun Journal’s Boys’ Basketball Coach of the Year! Coach Sadler, the calm and steady leader of the ‘Canes team, led the PCHS boys’ team to a 22-6 season, which included a trip to the state championship game. He knows just how to instruct the players to play better basketball and to be better individuals off the court. Many thanks to Coach Sadler for his dedication and countless hours contributed to the success of this year’s team! With Coach Sadler at the “wheel” along with his returning talented players, next year’s basketball season will, no doubt, be another season to go down in PCHS history.
Photo Caption: Coach Earl Sadler, Jr.