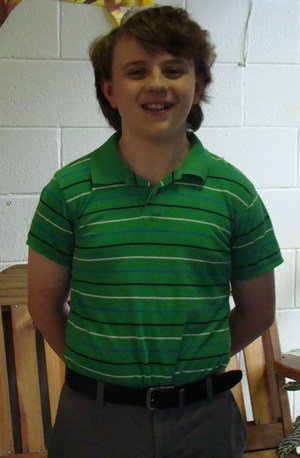 During the May meeting of the Pamlico County Board of Education, seventh grader Jamie Durham was recognized for earning 1st Chair Tenor Saxophone in the North Carolina Middle School All State Honor Band.
This is a major accomplishment for Jamie, the band program, Pamlico County Middle School, and Pamlico County Schools. To achieve this as a band student is much like being a state champion in a sport. Jamie had to initially audition for the All Eastern District Band where he earned 1st Chair Tenor Saxophone in the Middle School Symphonic Band. That was quite an accomplishment in itself for a middle schooler, but there was more to come. Each of the six band districts in North Carolina sent their top two tenor saxophonists to audition for the All State Band. The 12 best middle school tenor saxophonists in the state auditioned to try to get one of the two tenor saxophone chairs in the band. There is no regard for school size and students audition against all middle school grade levels. In an effort to be completely fair and impartial, the auditions at the state level are done as a blind audition. The judges do not see the students auditioning and only get to hear the sound of their instrument. Students are also never judged by their own band directors at the state auditions. The band practiced together on May 4-6, 2018 and then played at the All State Band Concert the evening of May 6th on the campus of the University of North Carolina-Chapel Hill.
Pictured: Jamie Durham