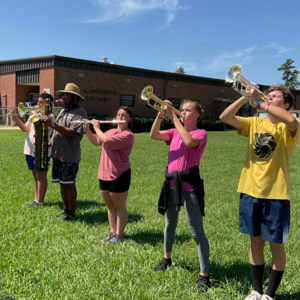 The Marching Hurricanes are finishing up their second full week of band camp.
The PCHS Marching Hurricanes have been hitting the field and practice rooms hard over the past two weeks - and they aren't done yet!  The band which consists of mainly high school students, but also a few hard working middle schoolers, have been attending band camp, which is the much anticipated kick off to their marching band season.
Band camp consists of practice from 8am - 6pm, 5 days a week for two weeks and then one final week of practice from 5:30 - 7:30 pm M-Th and culminates in the first home football game of the season that Friday, August 19th.
The band practices their outside drills and fundamentals while carrying their instruments to learn form and improve their stamina for the shows and competitions to come. The students say that it is HOT and tiring but definitely worth it as they see improvement as they continue to work together as a team.