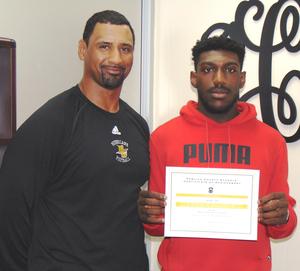 Savone Tutt was recognized during the November meeting of the Pamlico County Board of Education for his record-breaking performance during the September 27 Riverside football game.
Savone had 19 carries for 369 yards and nine rushing touchdowns. Additionally, he had two kick returns (96 yards total), three two-point conversions, 527 all-purpose yards & 60 points scored. On the defensive side, he added seven tackles! His nine touchdowns breaks a state record set by Hope Mills’ Donnie Davis in 1960. Additionally, his 60 points breaks the 2013 record set by Princeton’s Johnny Frazier. Frazier’s record was 50 points. The Hurricanes went on to win against Riverside 72-56 that night. The NCHSAA recognized Savone in their Week #6 Performance of the Week for his record-breaking performance. He was recognized on the NCHSAA Website and social media pages and will also be honored at a banquet for all recipients from this year in April.
Picture: (left to right) PCHS Head Football Coach Ron Cook and Savone Tutt