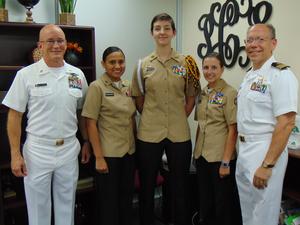 Congratulations to the Pamlico County High School Navy Junior Reserve Officers’ Training Corps (PCHS NJROTC) for, once again, being selected as a Distinguished Unit, with Academic Honors.
This is the 7th year in a row that the unit has been designated as a Distinguished. This highly regarded distinction is made in recognition of the exceptional achievement of the unit during the 2018-19 School Year. The award is given annually to schools whose NJROTC Program ranks in the top 30 percent of the units in each NJROTC area. This selection is based upon the excellence attained in administration, academic performance, military proficiency and host school support.
The PCHS Unit was recognized during the June meeting of the Board of Education. The high school staff and the unit, along with Commander Michael Robinson and Master Chief Dave Matthews, are to be commended for having received this special award once again. Representing the PCHS NJROTC at the meeting were Jasmin Cervantes (XO), Macy Tyson (Past CO and XO) and Annie Anderson (Current CO).
Pictured are (left to right) Master Chief Matthews, Jasmin Cervantes, Annie Anderson, Macy Tyson and Commander Robinson.